I'm starting to collect a list of simple craft ideas for young people to have fun with. At the moment I'm concentrating on handmade felt but would welcome any other suggestions. 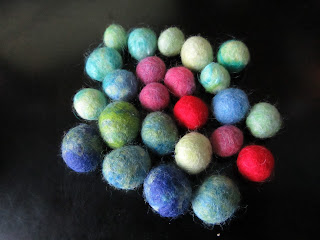 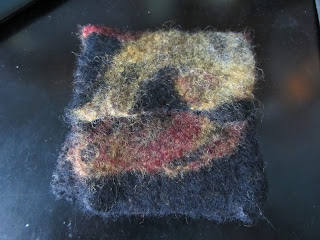 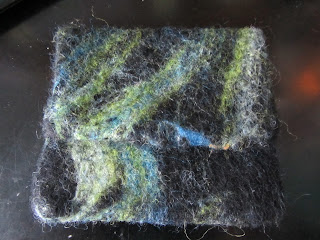 Yesterday I experimented with felt purses and made some more beads which are now drying out...just thought, maybe  phone cases may be an option. I'm really looking for anything that involves fabric/fibre etc and hopefully exercising my embroidery skills which are getting very rusty these days.
Posted by Guzzisue at Monday, July 29, 2013 6 comments:

Email ThisBlogThis!Share to TwitterShare to FacebookShare to Pinterest
Labels: felt

Saturday was spent with friends, listening to music, sitting in the sun and catching up with the gossip, the perfect afternoon. 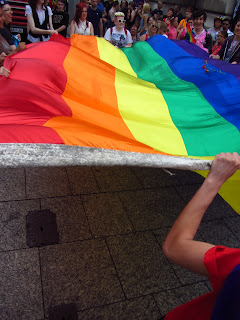 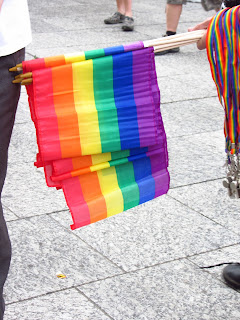 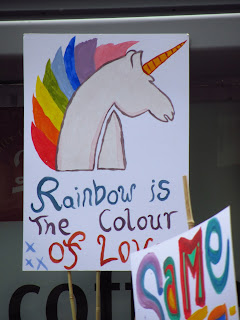 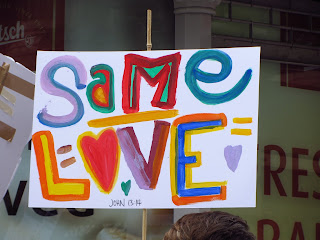 Hey Sue, do you know how to make felt?

This question was asked as we watched the lancaster taxi up the runway a couple of weeks or so ago. Of course I answered, wet, needle or knitted which totally confused her. So this week I introduced a ukulele player to the joys of wet felting with a bit of dyeing thrown in.

We made flat felt. 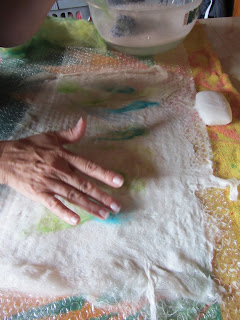 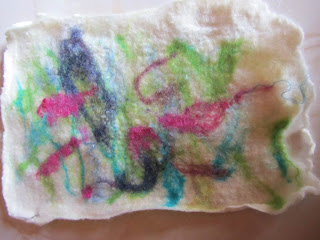 we made felted bowls using the balloon method 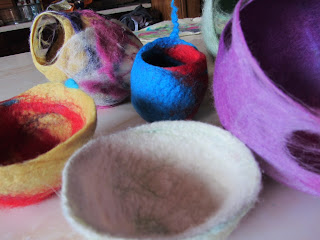 We made felt beads 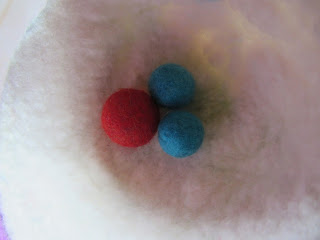 and we dyed some handspun romney 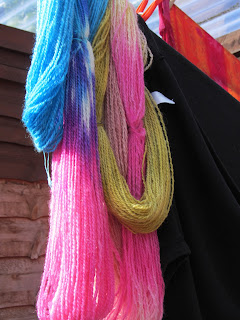 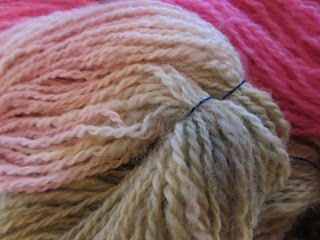 we eventually ran out of time so a second session will be held on needle felting soon :-)
I also grabbed a few mins this week to unwrap a fleece gifted to me last month....its HUGE!! 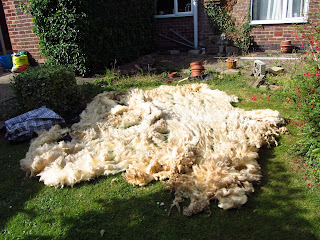 I am going to be so busy!

Last weekend we travelled down to Leamington Spa as The Nottingham Ukulele Orchestra were playing as part of Leamington Spa's first Ukulele Festival. My man took his ukes and I took my toys, this time it was an inkle loom and a drop spindle :-)
Fortunately the weather was good and somewhat cooler than it has been recently and the whole event was well organised, My only comment would be that many of the Uke groups there were playing the same selection of tunes and when we reached the fourth rendition of you are my sunshine etc my patience began to get a little stretched. Fortunately the Nottingham Uke guys have a different set list and attracted quite a bit of attention
Photos of this event by myself are a bit limited as I was busy trying to weave some wrist bands for next weekend but here we go... 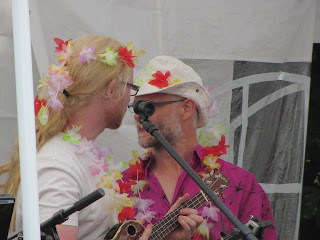 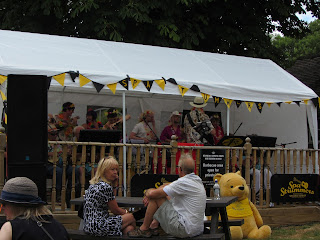 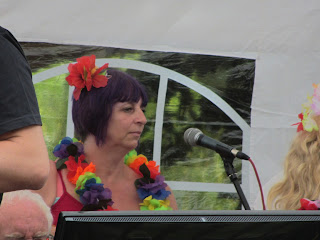 However this made us all smile.....

We stayed over night locally and took some time out the next morning to have a wander round the town before heading home. 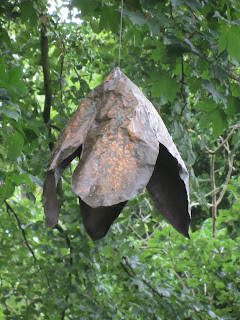 Bell/flower hanging over the river Leam 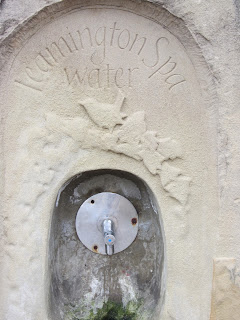 The Spa water which the town is famous for 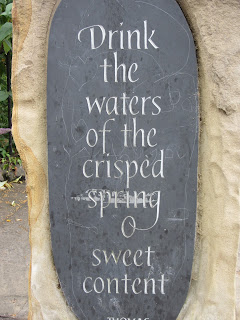 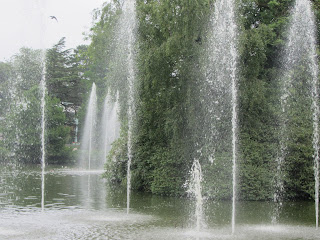 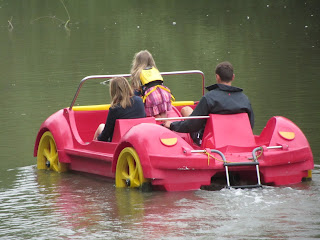 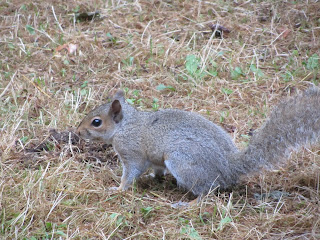 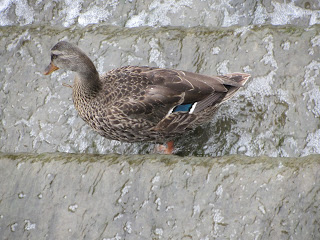 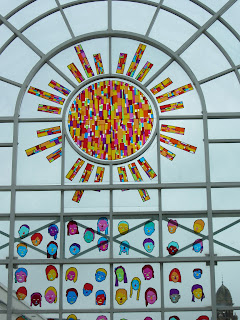 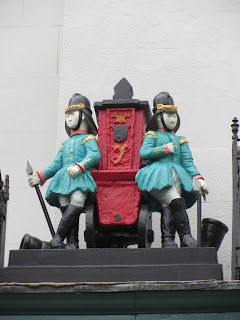 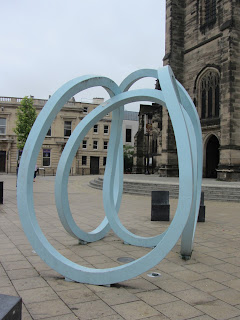 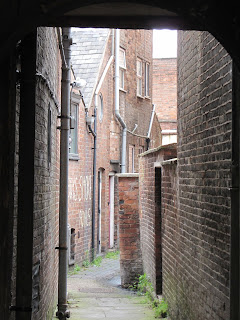 An enjoyable short break for both of us :-)

Hi I seemed to have found myself very busy doing everything except spin!! so my small bossie has been in my bag with the polworth that I have had on the go for a while.

and the last bobbin of Romney spun today means that I can start plying tomorrow night depending on what time I get back from the pub :-)

Spinning round the windmill

Today's spinning destination was Greens Windmill with the Woolly Outlaws spinning group, the day started out misty and cool compared with the last week or so.

The windmill is one of Nottinghams greatest secrets in spite of the fact that you can see it from several areas round the city centre.

They kindly put the bunting out, well I suspect they would have put it out anyway but it is  on a slightly larger scale than that belonging to the spinning group.

We climbed up the inside of the wheel

and looked out the window as the sails went past

we eventually settled down to spin, chat, eat cake etc

and a good day was had by all inspite of playing hunt the shade on a very hot day!!

One for the boys

OK, warning, warning, warning.......photo heavy post!! we spent last Sunday at the Lincolnshire Aviation Heritage Centre so I took my camera and played....not a spinning wheel or sheep in sight...just a big plane ( and one slightly smaller one)

Full photo link here It was a lovely sunny day and a little bit surreal seeing the Lancaster parked next to the picnic tables !!