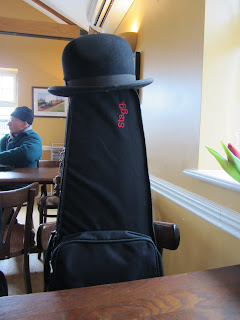 It was cold, in fact it was snowing! So the first stop on our trip to the Great Central Railway was the cafe where we all bagged a seat and ordered hot drinks to thaw out our hands.

Now there didn't seem to be as many traction engines around as last year, maybe the weather had put them off, maybe Easter was simply too early this year. Still we had chance to have a wander round before the Uke Orchestra had to knuckle down and play in the beer tent. Still I grabbed a few photos before they went on 'stage'

More importantly, I managed to infiltrate the Uke Orchestra with my spinning wheel...LOOK!!

A very cold session but a couple of bobbins filled :-)

,,,,and some gentle spinning 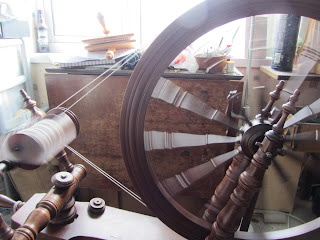 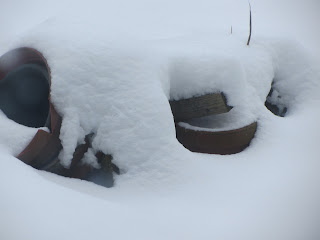 I've not got a lot to say at the moment, its still snowing, its still cold and I'm still putting the kettle on every half hour or so. I think a spot of gentle spinning is called for this afternoon.

erm any one seen spring? 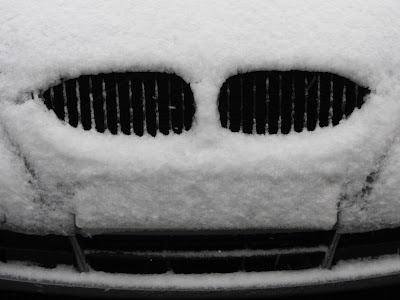 well, today I spotted this in town, same artist? 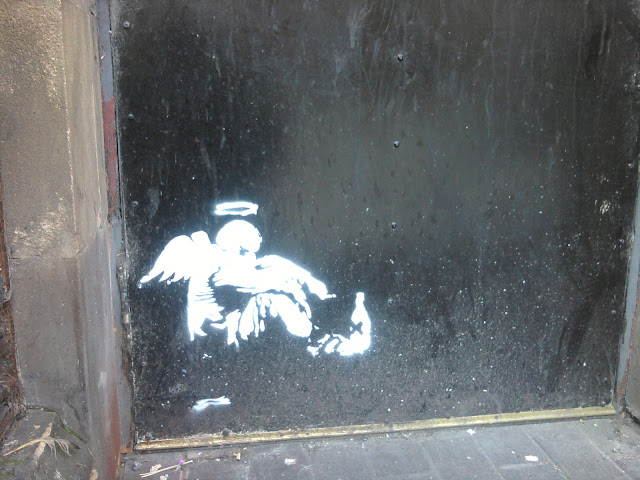 I was in town yesterday  to meet my Mum for coffee and wandered across the Old Market Square to find the Malaysian Festival house in a number of small tents. The music guided me across to the Gamalan band although I'm not sure whether that is the correct name, playing in one of the small marquees. I had may camera with me, complete with memory card but to my annoyance I found that the battery was still sat at home recharging next to my PC.
As a result, I apologise for the quality of the photos but would still like to share them with you. 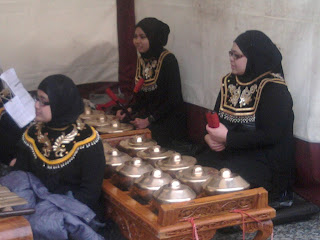 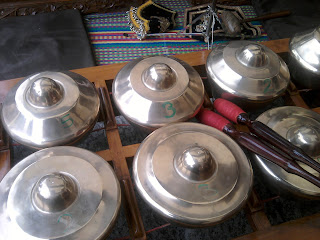 each of these instruments which are hollow like a bell and has a number on it, where there are two numbers the same, they seem to be an octave apart 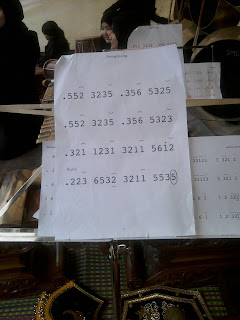 This is the music notation that they were using, 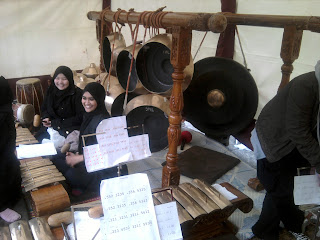 and here are some of the other instruments.


Needless to say, by the time my mum came back to find me, I was sat with them having a go!!!

Hi, I was going to write this last night but decided that I needed to restring the banjo, over an hour later, 3 new strings on and in tune, two broken nails I decided to quit. Never know such a stupid set up, hooks and looped wires which are barely big enough. Still, it sounds a little better, hasn't improved my playing hehe.......I've only had it for just over a week so its taking up a lot of my time at the moment and you know where this conversation is going................... 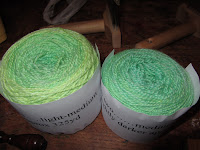 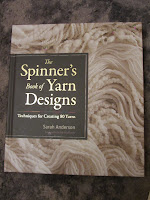 I've not done so much spinning in the last month but the green Romney is on its way to a new home to say thank you for a gift I received recently, also I've made a note not to dye that colour again as it really doesn't suit me and much as I enjoy spinning it, I really don't think I could knit with it. I did once and my niece now has a lovely green shawlette ! Anyway, at 500+yards and gradient spun from light to medium green I suspect that someone is going to have a lot of fun with this. 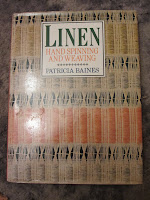 The Jacob has been plied and is ready to be washed at the weekend and I have spun a bobbin and a half of brown bond with quite a bit more to go!. The monthly guild meeting saw a Great Wheel turn up and a snowy trip to the Peak District resulted in some retail therapy. The book on Linen spinning was an absolute bargain, untouched with dust cover for...........£2.49 in the Oxfam bookshop in Glossop.
The latest copy of Yarnmaker dropped through the door and I treated myself to a copy of the Spinners book of Yarn Designs :-) 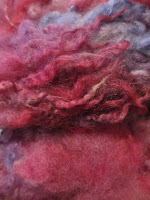 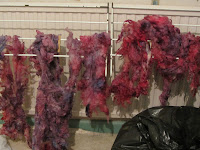 At the Guild meeting I was handed a small bag on Shetland x Berrichon du Cher, at least I think that is what it is !! the fleece had been washed but was still greasy so I gave it a good hot wash and popped it into the dye pot...........more truthfully, I put it in the cat litter tray ( no cats here, just a good deep tray) splashed some dye on it and chucked in into the steamer. Once cooled I rinsed it well, gave it a quick spin and left by the radiator to dry. I mixed up the colours and blended them on my combs ending up with various shades of a sort of crushed berry colour. This yarn, if nice enough, is destined to be a shawlette to be either auctioned or raffled off in aid of Teen Cancer Trust which is this years workplace fund raising challenge. In fact the crafty folks at work are hoping to put together a series of craft nights with demos and mini workshops to raise funds. 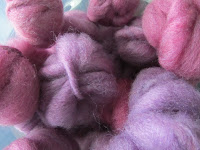 I have spun one bobbin and am now working on the next one. 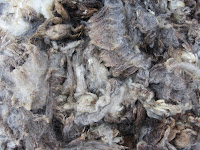 My plan not to buy more fleece has failed as a small amount of Jacob/Polwarth came through the door last Saturday, very soft but very short staple, mostly less than 2 inch so this will be a challenge for the future. In the meantime it has been washed and popped into a pillow case for storage. I took a photo and then found out that, taking a picture of white and grey fleece on a grey background is not necessarily the best idea! So here is a slightly better one.

So, I will leave you now and have a wander round the other Woolly Wednesday posts to see what you have all been up to then I will carry on with my spinning. 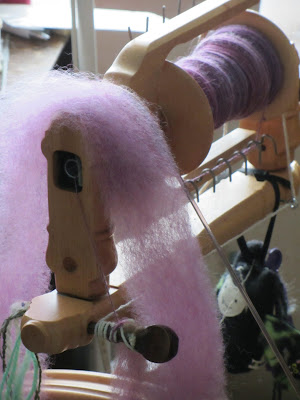 Have a great month everyone xx

ok, so it made me smile