Hi,
Last Saturday we went over to East Bridgford Village show to provide a spinning demo for a friend who has a nearby farm and always shows a few animals for the children. 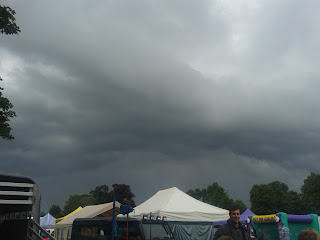 The weather forecast was bad and the ground already soggy from days of rain. The fire engine drove onto the showground and promptly sank into the mud even before the rain had started. Fortunately this being a village show  meant there was a display section labelled tractors and the owners were more than willing to see which one was capable of pulling a fire engine. In the end it took three of them to pull it out. 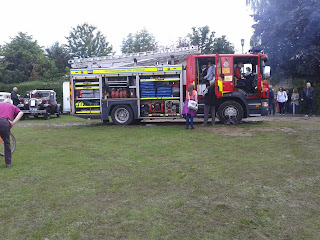 We started off sat on a rug in front of the sheep pen. The gate opened at  11 on the dot as did the skies and we beat a hasty retreat under a large canopy. 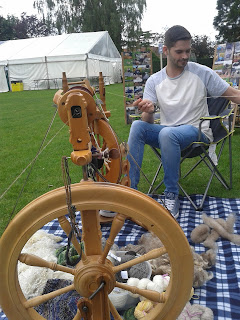 This set the theme for the day, dark skies and very heavy showers.

The animals proved to be a big draw as usual, the sheep greeted most visitors except when it was raining. This prompted questions.. why don't you put the sheep under cover. ..look at that brown one ! 'That brown one' was actually a miniature Shetland pony and actually smaller than a sheep and in a separate enclosure. Although this wasn't helped by a certain person trying to convince people that she was a rare breed sheep. 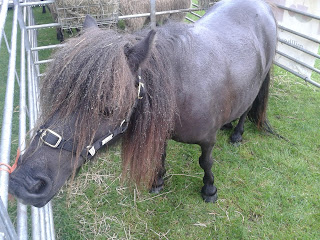 We were kept very busy as the local primary school had just reached the part of the syllabus that deals with textiles..spinning, weaving with cotton and wool.
So the day was spent explaining the workings of the wheel, showing how the fibre twists together with how to use a drop spindle. All the young people went away with a sample of hand spun and some tried out the drop spindle. Parents took photos of the wheels and spinners for their children to take into school. 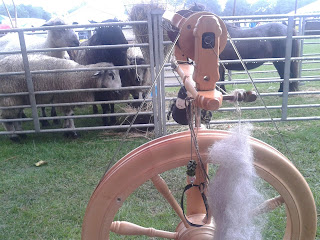 In spite of the weather,  we all had a good time, ate tea and cake and amazing cheese and leek pasties. Hopefully we will be at the next show at Lowdham. 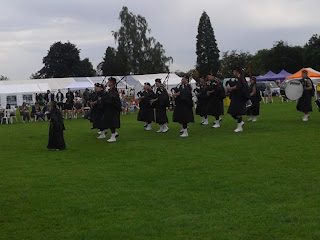 That time of year

Hi, it's ukulele festival time again but this time I don't have my camera so it's just a couple of rubbish photos with my tablet.

Unfortunately, just getting out of Nottingham was a challenge with the front suspension on the car collapsing about a mile from where I was picked up. Hubby managed to get the car to the garage which was fortunately less than a mile away and they offered to lend us a car for the weekend. In the mean time I had caught the bus back to town and 20 minutes later he picked my up again from the same spot as earlier.  Talk about deja Vue !

The festival was really busy Friday night as the rain drove everyone inside. Saturday was dry and all the action was at the town hall. I did my usual thing of spending the afternoon crafting then enjoying the music in the evening. 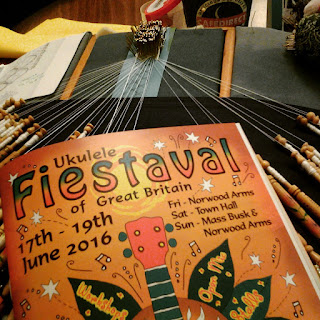 And rejoined the the crowds in the theatre for the evening show. 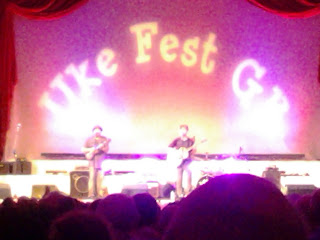 We headed back home Sunday dinnertime after the big busk, I was tired as this had also been my first week working full time since last December and we were both feeling the effects of being away.
Posted by Guzzisue at Friday, June 24, 2016 1 comment:

but I'm back at work which has neamt that I'm either working or sleeping!! 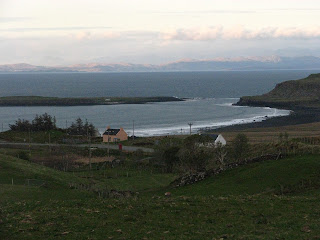 Just seeing the view from the cottage makes me feel better :-)

and to make things feel right, we arrived by boat rather than the bridge. 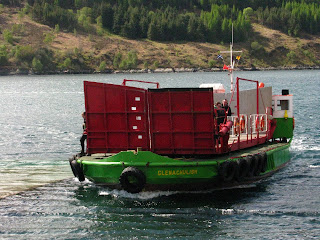 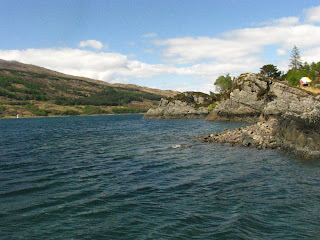 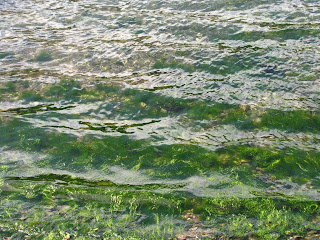 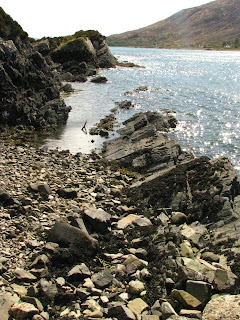