Not a lot of crafting this week as the workmen have been back in the garden and I've been prepping fibre to take away with me.

On Monday it rained so sorting out our belongings from last weekend was the best bet.

Tuesday, the men came back and fitted the hand rail in the front garden, at long last it is finished ! I don't have any before photos to hand ( forgot to take them) but there was a hedge, large pampas grass, a pond, numerous conifers, two rockery areas, all overgrown. Basically it was a jungle that couldn't be tamed.

So  7am Wednesday morning the garden looked  looked like this. 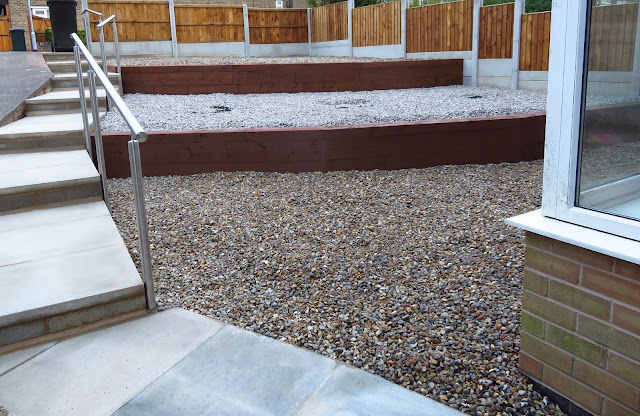 By 9.30am it was beginning to look like this! 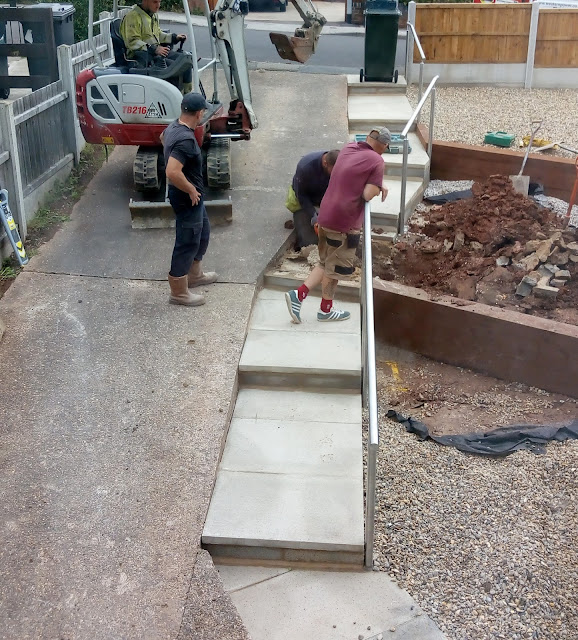 I could have cried 😥

Its all back together now, joint effort by the electric board and the landscape garden team.

On the crafting front, I've started a new strip of lace. I'm still thinking about the best way to display them but I've found a lot of acrylic felt so maybe I'll just mount them then stick into one of my numerous sketchbooks.

I've also prepped about 500 gm more of the Jacob ready to take away with me as I wanted and easy spin whilst camping.

As the TDF is starting again next weekend, I'm in two minds whether to take part. I may include my spindle again then I can at least do a few mins each day.

That really is about it for now, sorry for such a short post, have a great weekend xx.

A change of scenery

Our last trip away was 16 March so we thought that we had better start to make up for lost time. On Friday we packed the van with nearly everything we needed and set off. We found out that a couple of things were missing once we got there but that always happens after we have emptied the van for its annual checks. 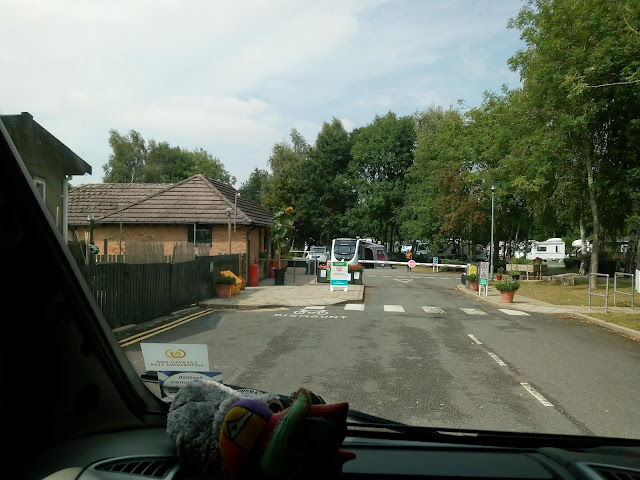 This is Ferry Meadows, we sometimes spend Christmas here as its not too far from home. I must admit that after staying at home for so long , I was a little apprehensive about going away but being in the van made it easier as we we can hideaway if we want to. The other good things about this site are that its a Caravan and Motorhome Club Site so the pitches are clearly laid out and distanced, the facilities are spotless and a lot of the time empty as majority of vans and caravans have their own. Also the site is next to Nene country Park and on a footpath/cycle path to Peterborough.

As Ian took his bike, I had some time to myself on Friday afternoon to sit in the sun and spin the first bobbin of the Jacob fleece. This time I had brought the E Spinner with me and sat outside with it on a table, cold drink to hand and a Radio 4 programme  about the seaside playing on the headphones.

When I eventually fancied a cup of tea, I discovered that we hadn't packed an essential item, the milk !! Ian rode in to the the rescue and dashed off the to campsite reception in his mask and bought some, phew

On Saturday I wandered out for a walk /hobble ( did I mention that I bruised my toes on Friday morning ). I was originally intending to walk back up towards the main road where I had spotted a coffee stall to get a caffeine fix but I didn't fancy it when I got there. I had noticed a sign at the railway saying that they were doing drinks so I headed back and was relieved to see only 4/5 people spread out amongst their tables. A hot chocolate and a few mins with the drop spindle followed.

The train arrived at 11.15 , I love steam, the smell and the sound. My Dad was a big steam engine enthusiast and passed the love of them on to me. 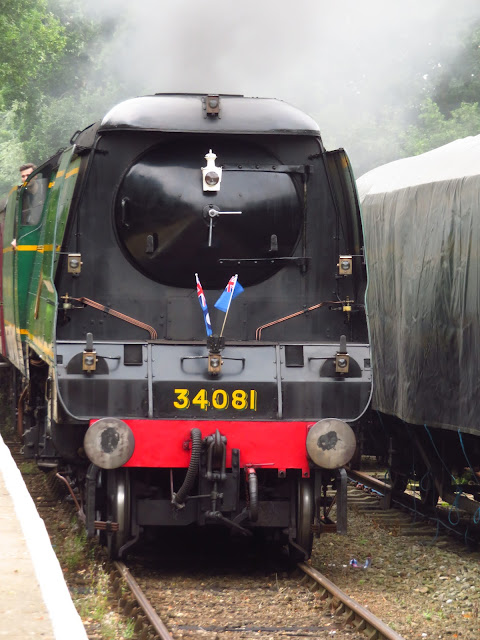 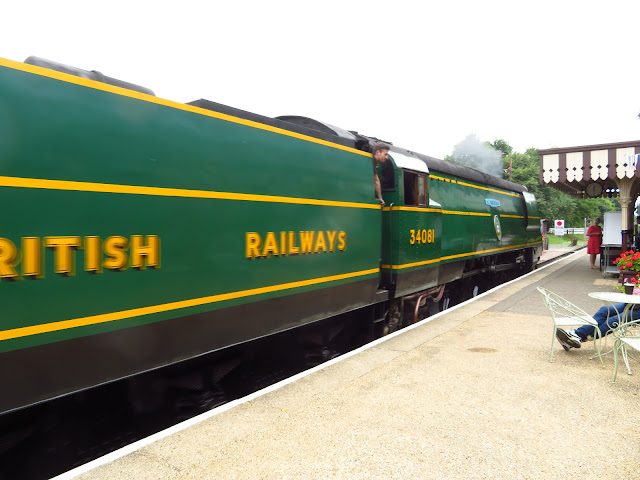 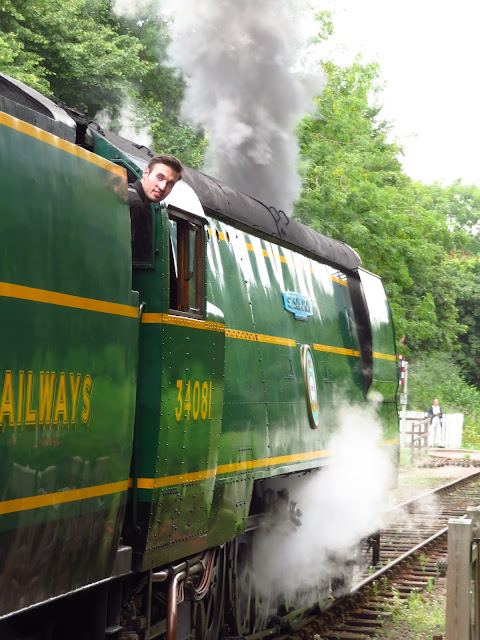 The rest of the weekend turned overcast and then very wet but it was really good to get out and about again even though I'm still very cautious about things.

On the craft front, I've spun the first skein of Jacob and I'm thinking that it would make a cozy cardi sometime if I ever pick up the courage to knit something big. Its a dk/aran weight so I may have a look at how much is needed. 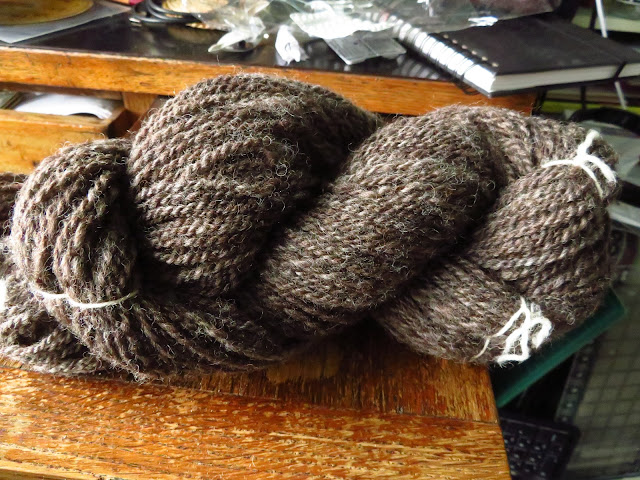 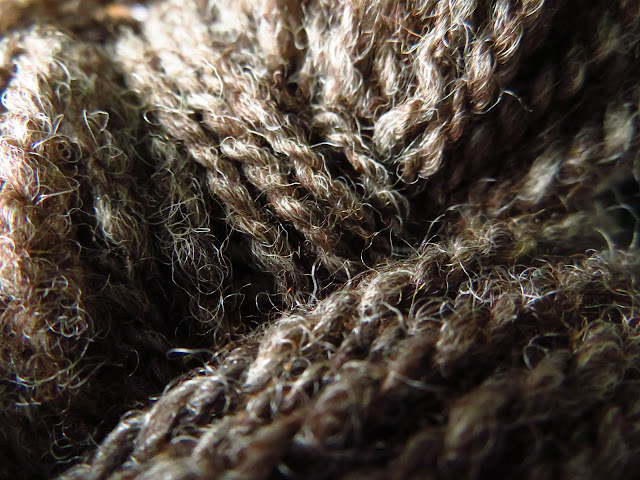 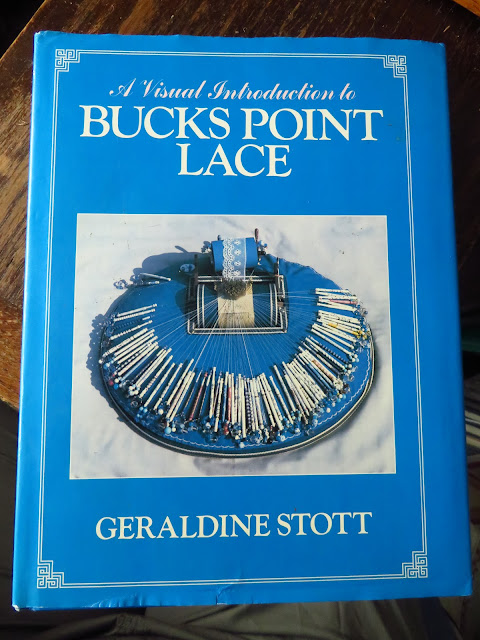 I find the written instruction and the diagrams very clear and I'm on pattern three at the moment. 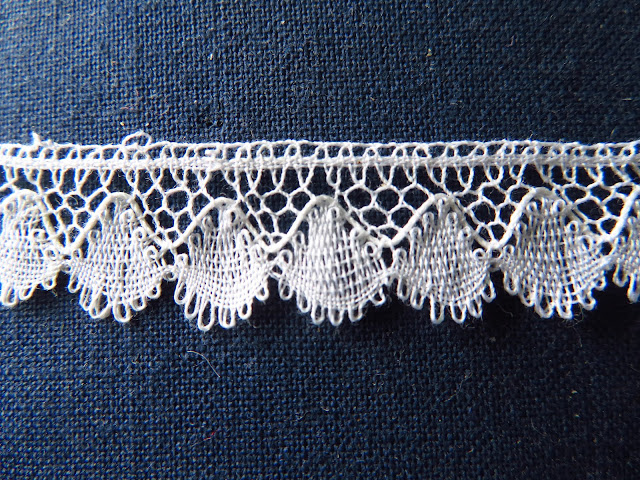 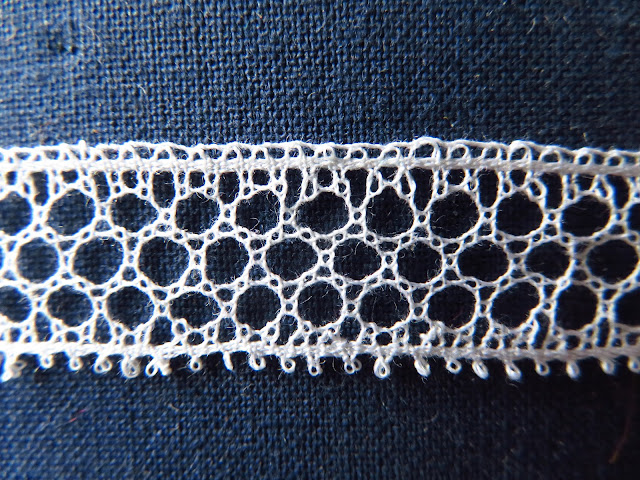 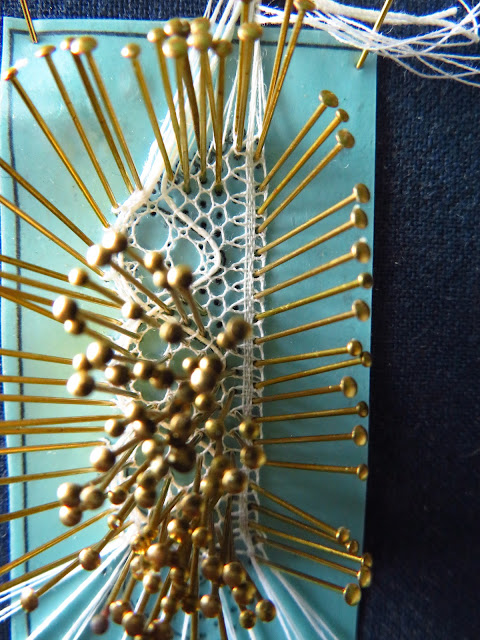 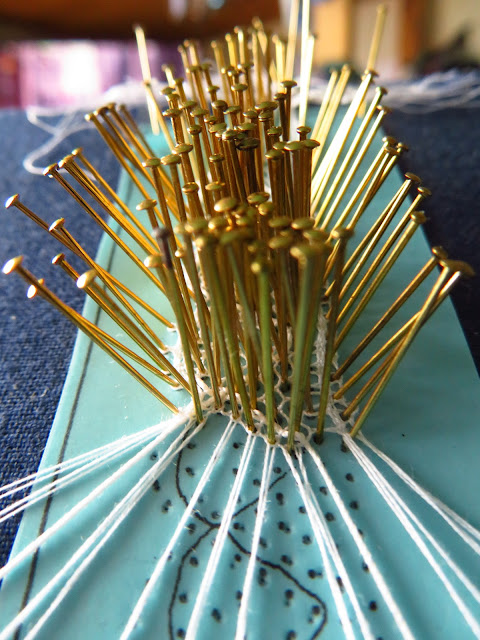 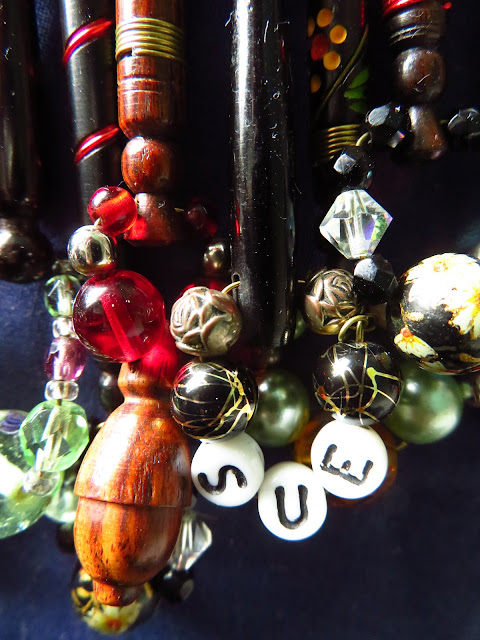 There are mistakes but I am learning from them and I could do with a softer gimp (thick) thread but I'm trying to use what I have and not buy any more at the moment.

Finally, a rare photo of me, Saturday morning waiting for the kettle to boil again.

Suddenly the temperatures are above 80 F so I have fleece on the line. I know I said no more fleece but I decided to support the fleece producers via a FB site for farmers who want to sell their fleece privately due to the low prices being offered by the Wool Marketing Board this year. 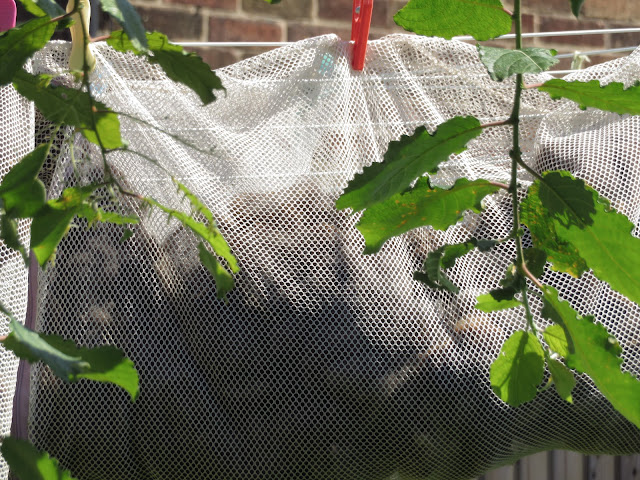 I purchased a Jacob/Dorset, reasonably soft for hats and outerwear, probably not next to skin but I'll see how it spins up. The fleece was really well skirted, very little vegetable matter and nice and open. The seller admitted that she hadn't sold fleece before so I was trying to describe what spinners liked when she said that she had one that was even more cobwebby :-) 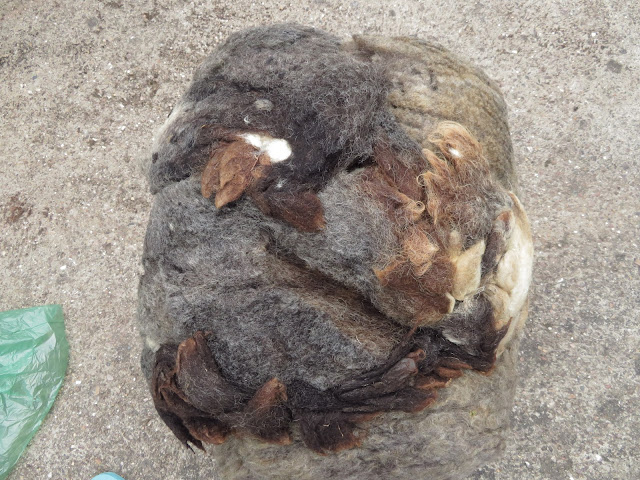 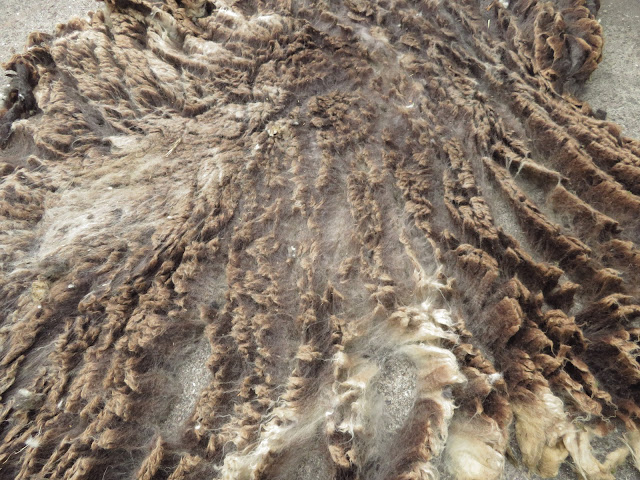 I see what she means ! I was after something that was an easy spin and not white as I've spun a lot of white fleece recently for dyeing and I wanted something different to spin when we go away for a weekend. Fingers crossed that we don't have a local lockdown over the next few weeks.

I've given it a quick pass on the combs then on the drum carder so its more manageable for packing, I'll divide the batts into 60gm batches so I'm guaranteed over 100gm per skein. 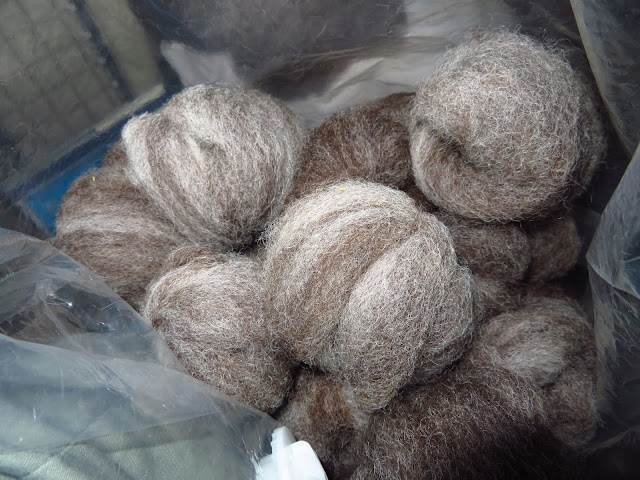 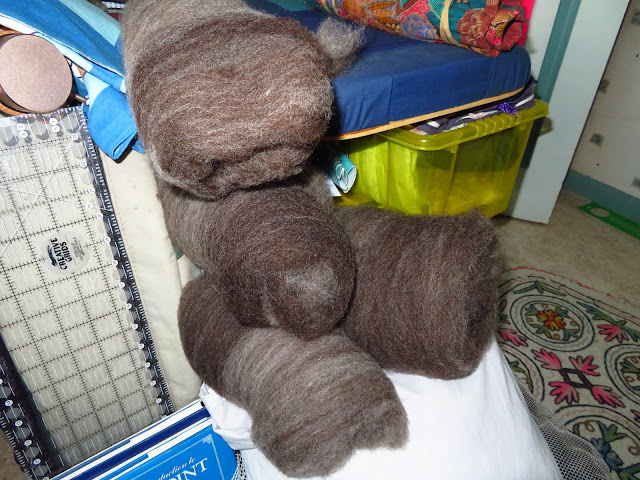 Yes, I have an empty lace pillow again, I finished the narrow strip that I was doing, then had chance to pick up my new glasses so I'm going to start a wider piece at some point during the week . I have 31 pairs plus an odd bobbin wound up ready for when I get chance to sit down and concentrate on setting the next piece up. After many years I seem to be coming to the end of some of my lace threads so next time I sell some yarn (if I get chance) I'll treat myself to some more threads.

The main excitement of the week was this, 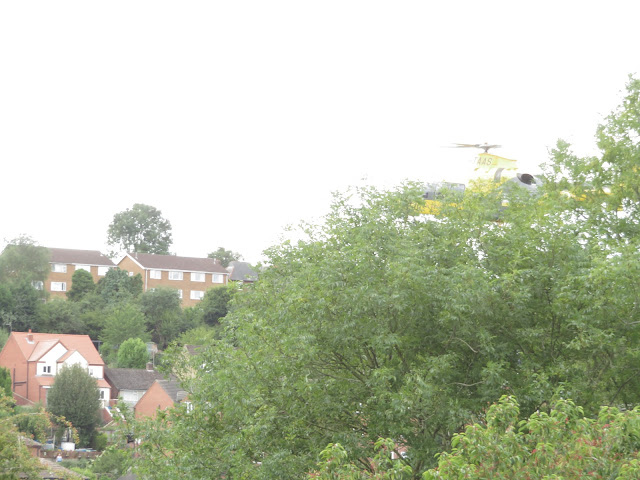 can you see it? this was the view from the back window in the middle of the week. 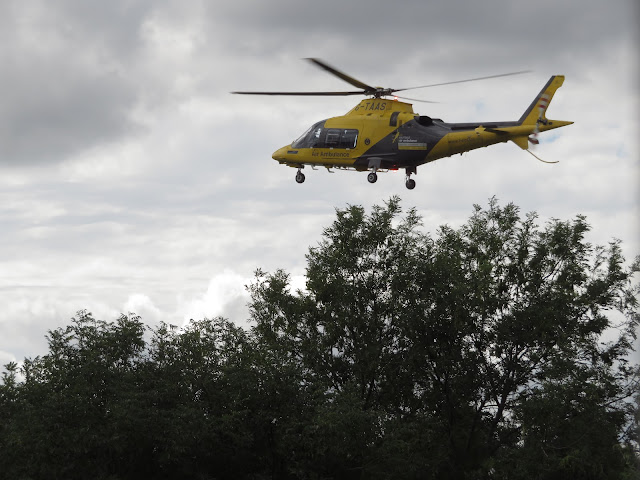 Following an incident a few roads away, the paramedics were flown in and landed on the playing field behind us where they were picked up and driven to the location. Major excitement for all the local children who were fascinated by it being so close and so loud ! We've lived here about 30 years and this is the first time this has happened as usually they would use the school playing fields nearby.

Following on from last weeks post, a friend asked me to make her some masks as the ones she had bought were all too big. I have four waiting for her to try when she calls round next week. 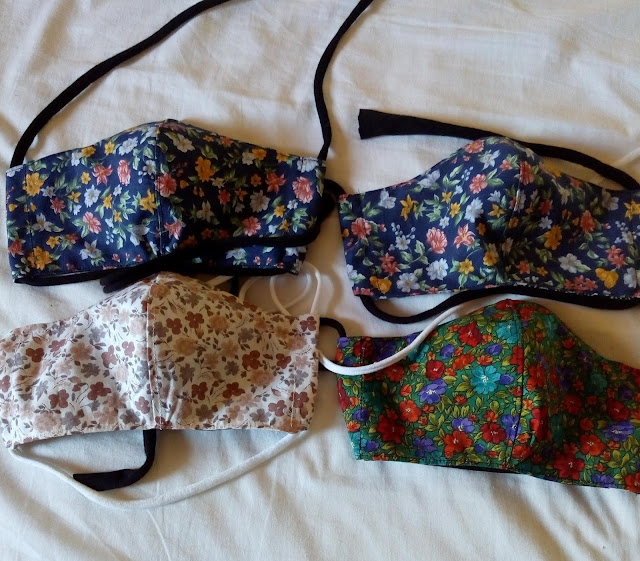 and whilst the machine was out I made a few more for us. I think we need maybe another half dozen before our holiday just incase they don't dry out fast enough when washed. We do have some disposable ones in case of emergency but I really don't want to buy anymore just for them to end up in landfill especially when I have so many fabric oddments stashed away. 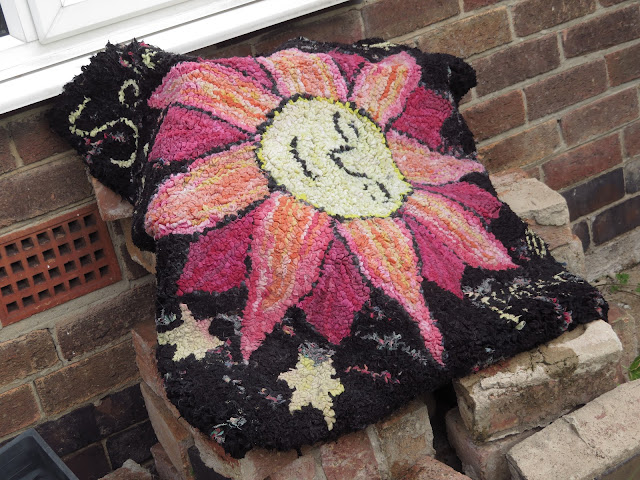 Now the weather is so good, my rag rug has had its first wash !! usually I would just give it a good beating but its had things spilt on it so it got a good scrub earlier this week.

Also the blackberries are out so its blackberry and apple with yogurt for breakfast :-) 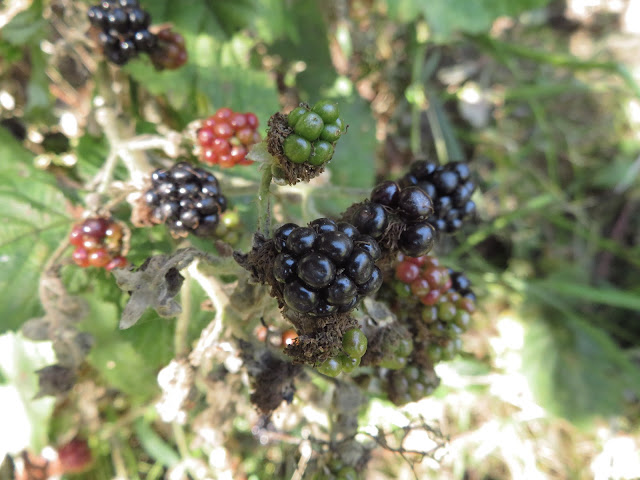 That's about it for now, have a great weekend x