I just thought that you may like to see this small visitor to our garden, I will be back on Monday as usual  x 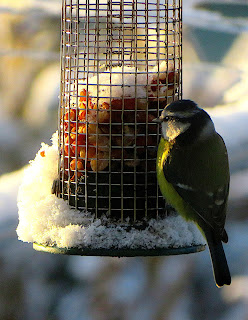 Yep, we finally had some snow worth mentioning. You have to remember that in parts of the UK, even 1cm of snow sparks excitement, I'm not sure that we had any around here last winter but yesterday this happened. 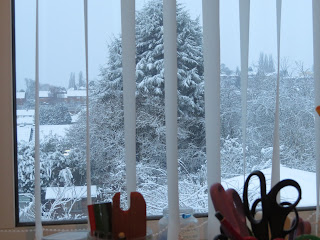 We had a couple of inches or so, enough to make the local kids head down to the school playing fields which have a good slope on them. 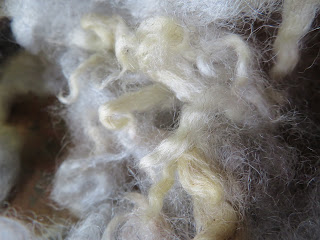 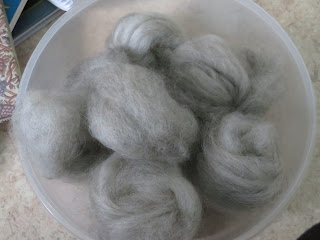 about 100gm of jacob which empties another of my many fleece filled pillowslips. 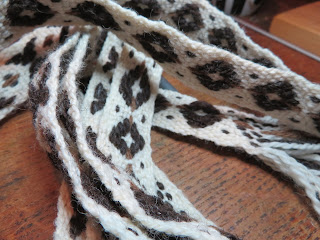 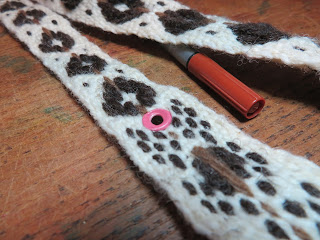 The inkle weaving is finished so I'm experimenting with some 'holes' and the next this will to be to see if I still have a bag of random buckles tucked away. 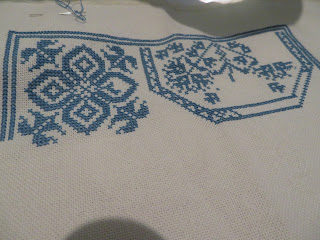 I forgot to show this last week, I'm intrigued by this style of sampler and found this chart on gazette 94 blog. 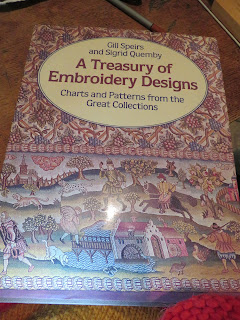 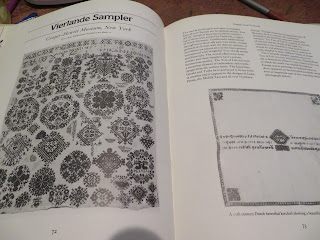 Bargain for the price :-)

Since I bought my new desktop computer back in 2016. I haven't bothered replacing the paint programs  like paint shop pro and corel. I just couldn't be bothered and frankly lost interest in that side of things for a while.

This week I downloaded Gimp just out of interest after finding a couple of pieces of my design work from way back when. I had a play with a couple of photos to try and find my way around the settings. 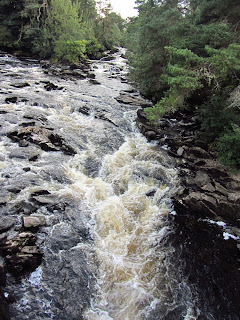 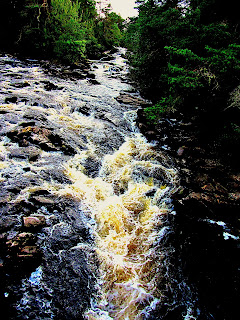 and this one of a peat stack I particularly like 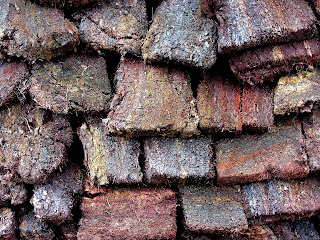 The next experiment was to tackle one of my designs. 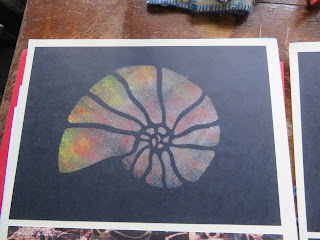 Now this is fun!!

I suspect I will be playing with this for a while :-)

That's about it for this week,, take care, speak soon xx

We are planning a couple of getaways for later in the year in the vain hope that we will be able to get the van out of storage, hoping to get back up to Scotland at some point and maybe just a  few days at the coast more locally although I can think of some wonderful coastal campsite north of the border.

I'd love to go back here 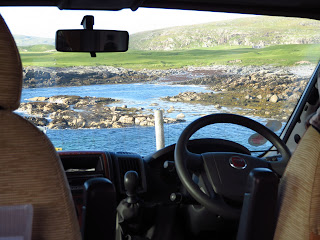 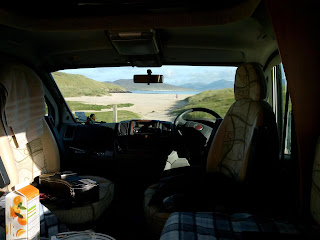 But that would involve a few ferries (outer Hebrides)

Still, I can visit in my imagination 😃

Anyway, Its been a different sort of week, I still haven't left the house but Ian had a weeks holiday owing so we tackled one or two small jobs around the house. The weather wasn't the best so stayed mainly inside. 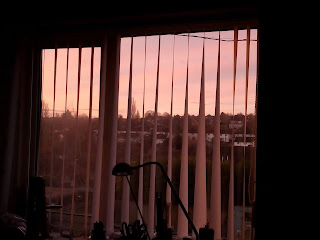 At least the sunrise was colourful this morning.

Finally, a quick crafty round up.

I've been thinking about what to do with fleece and handspun other than knitting which is my usual go to. I've come up with a little list so here is number 1 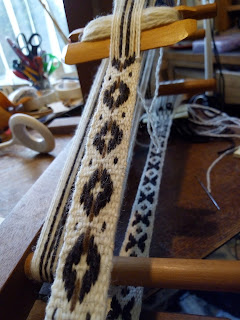 Inkle weaving or sometimes called band weaving. Woven on an inkle loom with the pattern being picked by hand with each pass. The warp is continuous and this is a warp facing weave ie you don't see the thread that is on the shuttle. 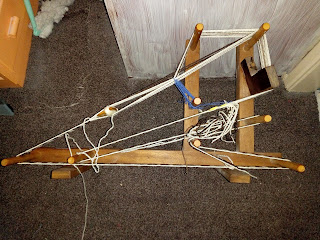 This shows that path of the warp round the loom, this is only the second time that I have tried weaving with hand spun yarn, it catches in the heddle strings but not too badly.

I only have a few inches to go so it will probably be finished later today.

I have made some progress on the garden SAL and I'm currently adding the third week. 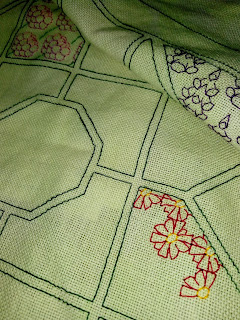 No spinning this week or knitting. I seem to have spent more time thinking than doing if you know what I mean !

My no spend on craft supplies attempt has been redrawn at £10 per month which makes a little more sense plus makes me feel better having ordered a book for the grand price of £3.27 including delivery ( thank you Prime) more about this when it arrives.

that's about all for now, take care, speak soon x

First thing... we have had the boiler fixed temporarily and we are now waiting on a new part so we have heating !! makes life more comfortable especially as we are both at home this week.

We are back in lockdown so my time is spent baking, crafting and doing the occasional bit of housework so not much change there.

Finally my hat is finished, I never thought I would get it off the needles. I swear that this is the longest time that I have spent on just one hat. 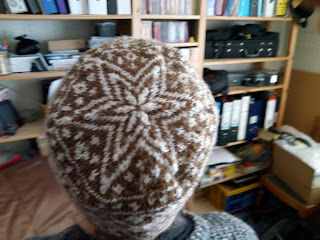 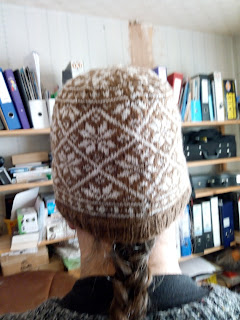 The photos make my head look a little strange in shape but its due to having a french plait at the back, also as this is the back you can see the jog in the back where the pattern changes,.

Baking this week was mainly biscuits so hubby can grab a couple for breakfast at 3am. They are oat based with ginger and spices. 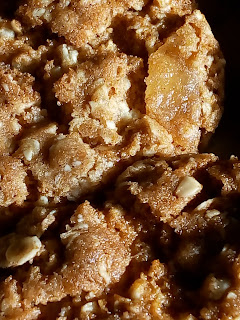 The spinning wheel has been out and another 4 bobbins spun and plyed, I tend to put around 60gm per bobbin, this is still the carded oddments from past projects. 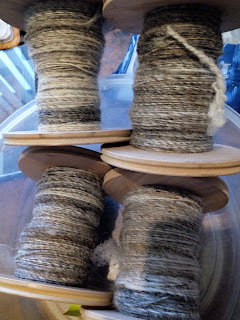 The end result has been around 900gm spun and waiting to be washed, even if this just makes a few plain hats it will have been worth it rather than just bin the excess. 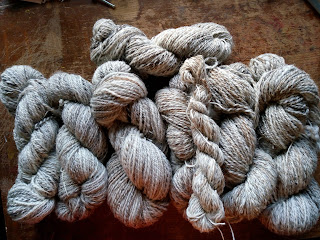 The first fill for the Steady Thread Blackwork stitch along has been published and stitched. I have the second one waiting to be stitched later this week. 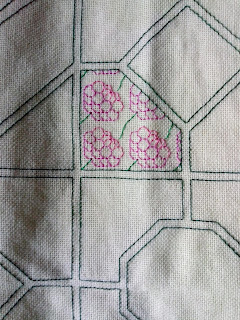 I'm also making some progress on the Blackwork Journey 2017 SAL. 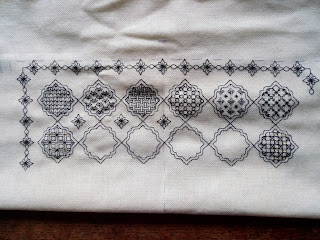 The weather has remained around 1/2C so has been frosty and the occasional snow shower, hopefully this week will be a little warmer. 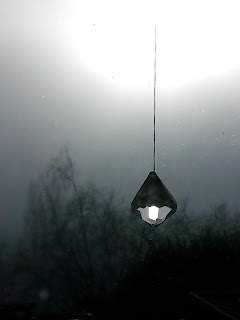 That's about it for now, I've no plans to leave the house so may have more crafty bits to share next week. Thanks for reading, take care xx

A cold start to the year

In fact its a very cold start to the year as our boiler has broken so we have no heating in the house other than a small fan heater. Ian has been dispatched to the camper to rescue a heater from there and I'm poised to ring the heating shop as soon as they open !

Other than that, the New Year started very noisily with fireworks and its been under 5c since then. We've had a touch of snow but I'm hoping for sun as it warms up the back of the house including my workroom.

I've been stitching on the Blackwork SAL, week one is now out so I'll add that later this week. 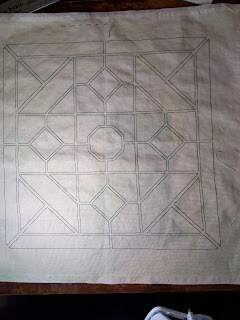 The 2017SAL also has a few more stitches on it. 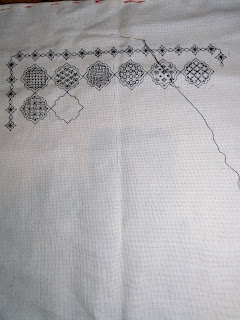 My main aim this week is to spin up some more oddments and think of what to knit with them.

So I'm going to keep wrapped up, keep the kettle on, pull on a hat and do some housework to keep me warm!!