spotted by my Mum

Should cider ever be this colour? 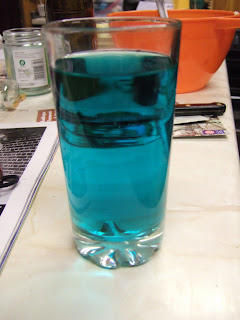 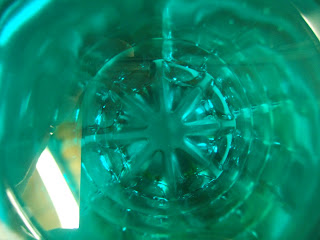 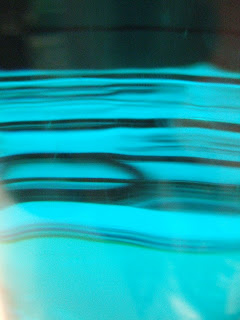 on the road again

but cheating and traveling by car! as this was our club rally, we travelled to Cornwall by car so we would have transport if required for food shopping etc.
The rally in question was the Deja Vu held by Drake MCC, usual tent in a muddy field event, drinking evening on Friday followed by a band and Vicars n Tarts party on Saturday I will spare you the photos of hairy men drssed as tarts though :-)


So , it was a cold and frosty weekend as the photos will testify!!

not a good time to stay outside with your bike!! however this frozen biker turned out to be a little less alarming close up.

but it was easily cold enough for the bikes to grow a frosty overcoat.
I occupied myself with a bag of the mystery fleece to sort and comb out and a play on my drop spindle. Fun was had as alcohol was consumed and I have many blurry pictures that will not mean anything unless you were there yourself! On the way home we stopped off in Honiton to grab a paper and I spotted several tiled pictures including these two.

I now have the challenge of spinning 100 gm of wool that was sorted etc under the influence of alcohol, maybe not such a good idea but who can resist partying with these guys? 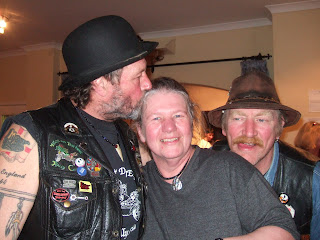 Hope you all had a good weekend :-)

As I left the guild on Saturday, a carrier bag was pressed into my hand with the words....I was going to put this on the compost heat but then I thought maybe you could do something with it!! So here it is,

Email ThisBlogThis!Share to TwitterShare to FacebookShare to Pinterest
Labels: spinning

After the guild meeting on Saturday we made our way to the Round Britain Rally (RBR to those in the know) presentation dinner. The RBR is a challenge to visit landmarks in every county of the country using a list of memorials, places of interest etc supplied by the organisers. The idea is to locate the landmark which involves a fair amount of research, visiting it and taking a photo of your motorbike by it. This keeps my hubby busy most weekend through the summer whilst I am out spinning etc.
So, as you would imagine, I was surprise to find fellow spinners there and wished that I had taken my wheel. Watch out next year, the wheels will be there, we have made arrangements!!

we caught the sunset on the way across.

Knitting made a surprise appearance in the form of a auction prize, do I didn't win it!

and I ended the evening in true spinnotts style, spinning in the bar.

OK, photo taken with empty spindle but I did do some spinning, honest!!!
Posted by Guzzisue at Friday, March 04, 2011 3 comments:

Wheely good at the guild

Saturday was guild day and although I had to leave early to attend another 'do' we managed to have a lot of fun, chat and laughter. So less of the chat from me and more of the pictures....Firstly one of the small group of spinners, I think if we all tried to sit in a circle it would be too big for the room some months so now we tend to spin in groups when there are a lot of wheels around.

Odette bought in her aeolian shawl to share, hand spun and knitted...jealous, really need to practise my knitting!!

We also had a visit fronm Steve from Anglersgifts.co.uk who is just starting to make drop spindles from recycled materials. The spindles are designed to to used as top or bottom whorl and have weights that can be added in 5gm increments. I have two of the spindles on trial so the spinnotts peeps can have a play at the next meeting. The general concensous was that, with a few minor adjustments, these are very nice spidles, have a nice long steady spin.
Posted by Guzzisue at Thursday, March 03, 2011 2 comments: